Now why is it, that all the ads for control top underwear feature SKINNY women who dont have a jelly-belly?! 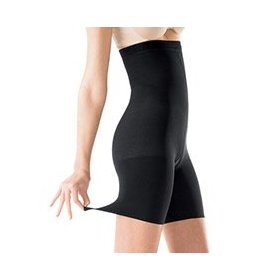 Control top underwear. It’s a woman’s dirty little secret. Well – not deathly skinny, trim and toned women. But I bet MOST women who have had their abdominal wall unwillingly pushed out beyond belief as an infant grew and shoved against it – most of THOSE women will know exactly what Im talking about when I talk about one of my favourite items of clothing. Yup. There was a time when I shuddered in horror at the sight of such things, classing them the tools of ancient, haggard crones. When I would think – me? Wear something like THAT? Hell no!

Well, never say never. Im a far wiser (and flabbier) woman now, so I do know a little bit about control..

Now the best control support ( and the most expensive kind that you need to ransom your arm and leg for ) is the kind that NOBODY can tell that you’re wearing. Its the kind that when you wear it, people ask you ‘hey, have you lost weight?!’ ( No. But my innards are being squeezed out my ears so that might explain it.) Or, ‘wow you look great, have you been working out?!’ (No. But i did have to shove and push for at least thirty minutes to put this damn thing on right. And the effort involved to breathe and move normally right now, is surely the same as that used in a hour long cardio class I reckon.) Yes, the best control under clothing is a SECRET. ( And no, its not the Victoria’s kind of secret…) Except in my case, it’s not really a secret because all my family know when Im wearing it. Because as soon as we’ve left whatever special occasion i donned it for, Im frantically trying to un-contort myself out of it. “Hurry, hurry, we have to get home so i can take this damn thing off! Its killing me…I cant breathe. I cant move. I cant eat. We gotta go home NOW!”

I was in serious love with my control underclothing. Until HRH pointed out to me something very important. (Because he is so wise and all-knowing about these things.)He said, .’‘You know, the problem with those stupid things you wear, is that they make your abdominal muscles lazy ( see, this is why I love this man, after 17 yrs and 5 children, he still BELIEVES in the possiblity that i have abdominal MUSCLES. No-one dare tell him that i actually never possessed any even before the children and the 17 yrs happened…) He continued, “The more you wear those things, the more your abs dont work to support themselves or tone themselves. They are too used to being forced in and so dont have to work. So you’re actually making your problem worse.” So what do you suggest instead? He replied, “Stop wearing them. Do Sit ups. Ab exercises. Everyday.”

Okaaaaay. (I was kiinda hoping for a wonder pill/instant miracle cure answer.) But Ive been thinking about his observation. A lot.

Because the issue of control has been coming up quite a bit in my home lately. You see, I’ll let you in on another dirty little secret. ( Almost as shocking as stomach squeezer underwear.) Being a parent, in many ways – is all about control. From the moment they’re born, we begin a ceaseless battle to make that beautiful child do what we want, how we want, and when ( and where) we want them to. We become masters of the arts of coaxing, bribery, flattery, blackmail and straight up coercion. A million and one ways to make a child DO WHAT YOU WANT THEM TO….WITHOUT THEM KNOWING THAT YOU’RE MAKING THEM DO IT. The better you are at this sneaky skill, the more peaceful your home will be.

But then your children become teenagers. And all of a sudden, they’re onto you. They KNOW when they’re being manipulated. And bribing them with offers of dessert…or another episode of Dora the Explorer…just doesnt cut it anymore. They dont believe you when you tell them that eating vegetables will make them smarter. Or that you are very best friends with Santa Claus. And that you turned down a supermodel contract to be their mother. Nah. None of that works anymore. They no longer believe you know everything and they are sometimes even the littlest bit ashamed to be seen with you. ( I cant imagine why! Especially when Im all control topped into place…Im a HOT mama then and they should be thankful to have such a stunning mother to take with them…) But they want to go places. And do things. Without you. Where you cant SEE them. Where you cant CONTROL them.

I can lock them up. Forbid them to FaceBook. ( do you know how many skanky Ho’s are on FB trying to Be-Friend your teenage son?!) Ban all music that doesnt come in a hymnbook. Only let them out of their study prisons for bread and water. Force them to be what I want them to be. But then, the day will come when they move out. Leave home. And I won’t be there to squeeze the life out of them anymore. And just like my miserable, lazy abs – my children will glut themselves on their independence, running ferociously wild and hanging out all over the place. They will have no clue how to walk tall, strong and sure on their own.

What’s a parent to do then? How not to be a control freak, but still gently ‘guide and nurture’.

Sit-ups. A little bit everyday. Exert a little bit of control here and there while they’re taking their wobbly independent steps. I let JB have a FB page. But only if I have access to it and can check out whats happening on there every now and again. They can spend their money however they like – but they have to work and earn it first. No, they cant go to parties or sleepovers, but they can have all their friends over to our house whenever they like. (I’ll even make cookies and pizza for them?!) Yes they can go to the mall or a movie – but only after i get to meet their friends first…yes they can go to a youth dance, but i will still try to spy on them via satellite tracking and GPS…sigh. And so it goes.

Aaaargh, its a minefield. Always worrying if I’m making the right choice. Always afraid that the next time i ‘let them go’, they’re going to crash and burn. It really would be so much easier ( and lazier) to just lock them up. And squish them into subjection.

But Im working on it. Me and my teenagers are learning a lot about self-control together. ( As I bite my tongue and try not to tell him his haircut looks like an electrocuted duck. As I stop myself from rewriting her english essay for her. Even though I just know i could get her bumped up from an A to an A+…) I am learning to treat my children like adults. So we can all walk tall, strong and sure. Together.

And I might…just might, chuck all the control shapers in the trash. And follow HRH’s advice and do garrulous amounts of sit-ups.

And then this could TOTALLY be me. Truly.