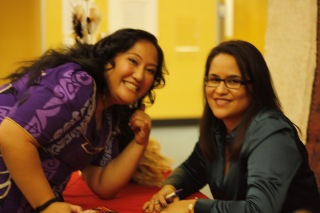 Me and the super fabulous and funny Gagaumalo Irene Nautu in Brisbane.


I was at church and someone said, “You haven’t blogged since April 19th. When are you going to blog again? I’m suffering from Sleepless in Samoa withdrawal symptoms.” It’s very nice to be missed, thank you Clint! So here I am back on the blog wagon with a quiz for everyone. A lot has been happening in the last month but ONE of the following items on the list is a LIE. Which is it? The first person to identify the lie scores a print copy of TELESA from me! (yay…)

1. I finished writing the second TELESA book, ‘When Water Burns’. It’s now in the capable hands of my editor and fingers crossed she doesn’t hate it or find too many things wrong with it.
2. There was a p-lab in the house across the street from us. We were woken up at 5am by a SWAT team raid with guns, sniffer dogs going nuts, fire trucks, police everywhere and a decontamination unit for everyone who had to go in the house.
3. I met star rugby players Digby Ioane and Quade Cooper at the Brisbane TELESA launch and I felt like a giant next to them. A very large, very splodgy, very shiny green giant.
4. As a kid, I promised myself I would NEVER go to Australia because I’m psycho scared of snakes. And mildly psycho scared of sharks, crocodiles and killer spiders. But I went to Australia last week and I didnt see a single snake, shark, crocodile, spider. OR a single kangaroo either.
5. Big Son went on a three day mountain biking trip and crashed into every single tree, bush and curve on the route. And he had a very very sore butt. And he never ever wants to go mountain biking again.
6. I quit eating Eclipse mints. Finally.
7. Ezra Taylor told a crowd of two hundred people that “Daniel” is pretty much “perfect” and the only thing the two of them have in common, is that they both play rugby. Have tattoos. And abs. ( Ok, he didn’t say the abs bit – the super cool MC doing the interview said that.) Ezra does deserve to get an award though, for being the mostest patient and accomodating cover model on the TELESA planet because not once did he get annoyed with the hyper-rabid-fan attention at the Brisbane Launch. (Security!)
8. The most amazingest cupcakes in the world have frangipanis on them and they’re made by an amazing cook called Netta.
9. Big Daughter read the first few chapters of ‘When Water Burns’ and told me “this is not suitable for young readers. I think you should cut out a lot of things or else nobody will let their kids read it.” Excuse me?! Like what stuff? “Like all the kissing. Do they have to keep kissing?!”
10. The Hot Man was embarassed because women in Australia kept exclaiming, “You must be the Hot Man! I read your wife’s blog…”
11. I wore disgustingly high heeled shoes to a book launch and DIDN’T TAKE THEM OFF. At least not until the end when nobody was looking.
12. I had a Diet Coke Tower at a place called the Hog’s Breath Cafe. And I wish I had one for my house. (hint hint to the universe…)
13. I think a GPS for your car is the stupidest thing ever. Especially when they get you lost for two hours on the way from the airport to your hotel.
14. I re-defined the word SLEEPLESS in the last few weeks of frantic writing. All night writing and writing for two days straight. I now, never want to write another book again. Ever. (Hopefully this feeling will go away soon. Or else book three in the series is in big trouble.)

22 thoughts on “Random Lies and Truths”