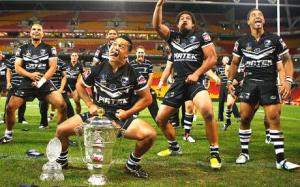 Do you think they ever paint their nails?

I have only ever been to ONE rugby league game in my life. This morning – to watch Little Son’s team play. ( Te Atatu Roosters Jnrs vs Waitemata. And yes, we won. Yaaay.) And yes, Little Son was quite impressive. Running. Tackling. Never dropping the ball once. And I was buzzed to bits about him. Except when it was half-time and he came running over for water, I noticed his fingernails. Painted three different colours…pink, green and glitter yellow. What the Hell?! I thought maybe his sisters did it to him. But no, he said quite proudly, “I painted them myself!” Before running back onto the field. And I was groaning. Because how are you supposed to smash people and intimidate the opposition with sparkly pretty nails?!

But nails aside, I now know the KEY to inspiring succcessful rugby. Five minutes into the game and a little boy with the speed of Crouching Tiger, Hidden Dragon dashed through the opposition and scored a brilliant try. We cheered. The little boy stood up, looked at his proud Dad and yelled out, “Twenty bucks right Dad?!”

His Dad gave him the thumbs up-you rock-signal. “Yep thats right son!” Then the father looked at us and explained, “I told him that for every try he scores, I’ll pay him twenty dollars.”

Aaaaahhhhh….the lights came on in our heads.

When we got home after the game, I told Little Son – “Boy, when you score your first try, I’ll buy you your first pair of real rugby boots.” (He’s currently wearing borrowed old shoes from his cousin.)

Little Son’s face lit up. “Can I have bright orange ones?!”

“You can have bright orange ones with flashing red lights on them if you want.” Little Son was speechless with joy.

Little Son piped in hopefully, “Take me to Disneyland?”

Which brought me down to earth quick smart. “Hell no! Dont be ridiculous. I’m not made of money! Whenever you score 20 tries, I’ll be very proud of you. And give you a hug.”

(Which did not transport him into another dimension of bliss…)But now with visions of electronically marvellous rugby boots, flash racer bikes and hours of Playsation fun – all dancing in his mind, the Little Son is well on his way to rugby league glory. Show me the money!

With or without sparkly pretty fingernails.

3 thoughts on “The key to greatness in rugby league.”