Some of you may know that I kinda like the Twilight books. Just a little bit… Ok, I’m completely obsessed with them, alright! I would choose Twilight over Shakespeare’s masterpieces any day. It’s sad, but true. (and since when have I ever told lies on this blog?) I love Twilight, which of course also means that I think the author Stephenie Meyer is kind of all-knowingly awesome. Anyone who can create an Edward Cullen AND a Jacob is right up there next to the inventor of Diet Coke and Doritos. *Said with tone of worshipful awe*

So when Stephenie Meyer says something, I listen. She said, “The HUNGER GAMES is amazing…I was obsessed with it.” So what did I do? I went and bought all the books in the Hunger Games series. I read them in one feverish go. And you know what? Stephenie Meyer IS all-knowingly awesome because she was right. The Hunger Games series is amazing. In a different genre from Twilight so the two cant be compared, but I would rank both series on an equal pinnacle of reading perfection.

And then when Stephenie Meyer said, “The Mortal Instruments Series is a world that I love to live in, beautiful!” then of course I had to go read it. I just finished the 3rd book and once again, I must concede that Ms Meyer is all-knowingly awesome because AGAIN she was right. This series is pretty cool and the lead character Jace gives Edward Cullen a run for his money. Stephenie Meyer really is super cool *more tones of worshipful awe*. If she told me to read the Bible I would do it! (Umm, but I like, totally read the Bible already. All the time. Before re-reading Twilight and all that other rubbish. Honest. And we all know that I never ever tell lies on this blog.) 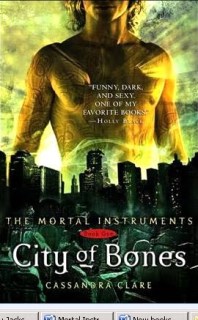 If you have been living under a rock ( or on one called Samoa) and havent heard of these two book series then please know that you’re living only half a life. Oh, and it goes without saying that if you have never heard of Twilight and the genius Stephenie Meyer – then you must be a zombie. (Which means we’re all in trouble because the Zombie Apocalypse has begun and we didnt know it.) I urge you to read: Twilight, Hunger Games and Mortal Instruments.

Because Stephenie Meyer said so.

What books rock your world? What author do YOU think is a creative genius? So genius that you would quit drinking Diet Coke if they said it was bad for you?

14 thoughts on “Stephenie Meyer Said So”