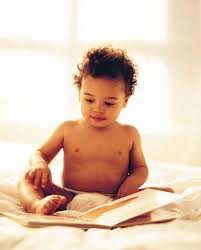 Shhh dont disturb him. He’s researching for his acceptance speech. For when he wins the Nobel Prize.

*Baby#1 I didnt let anybody touch him. Breathe the same air as him. In case they had germs. The plague. Bad habits. Scabies. Tapeworm. Evil thoughts. Or in case they dropped him. Because of course everyone else was an idiot and didn’t know anything about looking after a baby.

But by Baby #5 – I handed that child to anyone with two arms. Family, friends, neighbors, passing acquaintances, complete strangers. ‘What a cute baby!’ Yes she is, here why dont you hold her/ take her for an hour long walk/read her the entire Twilight series/ bring her back when she’s toilet trained and earning a six figure salary.’

*On Baby#1 – I made all his food from only natural, organically grown Mother Earth bounty. He didnt eat sugar, salt or butter. And i wanted to kill people who thought it was cute to break the food rules and slip him additive-laden ice cream and lollies.

Baby#5 – She had the very best food that money could buy. In a bottle. A packet. A Happy Meal. Now, she doesnt even know what a vegetable is. I bribe her with chicken nuggets to do what I want. She wants oatmeal choc chip cookies for breakfast? Give em to her. Anything to shut her up. It’s healthy, homemade fare isnt it? There’s oatmeal in there.

Baby #1 – Listened to classical music in the womb. (The whole put-headphones on my fat stomach thing? Yes, I did that.) I read him Shakespeare and Keats poetry when he was a scrawny premature 3 pounder. And when he was a toddler, he didnt watch any junk cartoons. NO. Because I was determined, this child was going to have every brain neuron stimulated and extended dammnit! He was going to be disgustingly intelligent in every way.

Baby#5 – Ummm well, I listened to a lot of Nelly Furtado and Timbaland when she was in the womb. So much so that when she came out, I would play it and she would stop crying. Truly. And i watched a lot of Desperate Housewives when I was breastfeeding her at 3am. I’m not sure what she’s learned from THAT. She’s extremely clever though. She knows all the words to every episode of Dora. And Little Bill. And Wonder Pets.

So yes, I understand the new parents desire to only do the very bestest for their child. When i see my new nephew, I make sure I don’t breathe on him. Try to hold him too much. And I certainly wont be slipping him candy when he’s eating his all-organic homemade baby cuisine. Because I’ve been there. And when the new parents eventually have 2,3,4 children? I will lend them our collection of Dora. Offer to babysit and feed their kids chicken nuggets. And cookies. Because they’re healthy…there’s oatmeal in there dammnit!

14 thoughts on “Don’t you DARE breathe on that baby!”