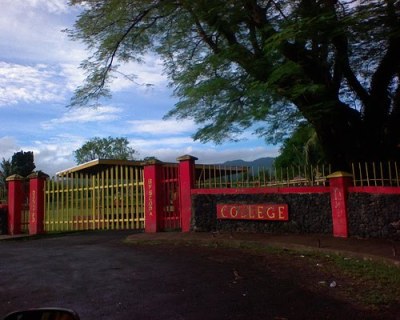 Picture of SAMCO gates courtesy of Samoa Live.
On Leila’s first day at Samoa College she’s given the grand tour by a boy called Simon…Or as he corrects her – Simone.

I quickly realized that my tourguide was what my uncle termed a ‘fa’afafine’. On our shopping trip to town for my school uniforms in the weekend, we had stopped to buy bread and the cashier had been a man…in a tight red tank top and floral mini skirt. Pink fingernails and expertly applied makeup had completed the ensemble. I guess I hadn’t expected full drag queen attire in a Samoan dairy on a Saturday morning. Reading my mind, Uncle Tuala waited until we were back in the car and then gave me a one word explanation.“Fa’afafine.”

“A fa’a – what?” I had asked completely befuddled.

“You know – a man who’s like a woman? A boy who acts like a girl? Fa’afafine translated loosely means…umm…like a girl…in the ways of a girl.”

Aunty Matile put a stop to the conversation in her usual abrupt no-nonsense manner.“Leila – in Samoa we have three different genders if you will – men and women and fa’afafine. It’s tradition. Don’t stare. Don’t be rude. They don’t like it.”

Fa’afafine – another new concept to put on my list of things to understand! Very conscious of aunty Matile’s directive about not staring and not being rude, I walked beside my tour guide with my head down, hesitant about what to say. However, Simone didn’t seem too fussed about Mrs Satu’s abhorrence for late comers as he strutted along the corridor with all the studied ease of a runway model, stopping often to greet passersby.

“Daahling – how was your weekend? …No way! Was he there? Ohmigosh you’re kidding…I hate you! Tell me all about it at lunch… Oh girlfriend wait up – how was Friday night? I heard about the V-Bar …hmm you wicked girl! I know – I was busy at home with our fa’alavelave…going crazy I couldn’t get out…See you later!….Yoohoo daaahling….”

Like the Queen of England acknowledging her humble courtiers I thought ungenerously with a mental groan as I realized there was no way I would avoid a horribly late entrance to class on my first day. Indeed I had a sneaking suspicion that Simone welcomed a late entrance – the more dramatic the better. I studied him out of the corner of my eye as he preened next to me. Almost as tall as me, skinny, beautiful liquid black eyes (was that a hint of forbidden eye liner?), glossy coal black hair combed in an Elvis style bouffant and carrying a shiny red handbag on one perfectly bent arm. (Don’t ask me how he fit any text books in that tiny thing…) Noticing my scrutiny, he stopped mid wave to look me up and down, one hand on his hip Kate Moss style.“So where you from?”

“Umm..D.C – I mean the States. My mum was Samoan but this is my first time here.”

“Huh? What do you mean…what did I do? What did I do where?” I was confused.

“You know – how did you screw up? You U.S Samoan kids get sent here all the time when your family can’t handle you over there. We get lots of juvenile delinquents here. So what did you do? Drugs, alcohol, gangs, a wicked boyfriend?” Simone seemed irritated with my inability to answer his question.

“Umm…I didn’t do anything. I mean, I’m just here for three months, summer vacation visiting my mom’s family and they thought I would enjoy a Samoan school.”

Simone raised an eyebrow disbelievingly and pursed his perfect lips (I’m sure that was lip liner – no boy could have such a perfectly defined cupids bow!) He sniffed and waved his hand airily.“Fine. Don’t tell me the truth. I can handle it. Now, come on! We’re late.”

I stumbled along after him with a pained half smile, hoping I hadn’t just made enemy number one at my new school. Great – maybe I should have invented a litany of felonies and misdemeanors just to make him happy?!.