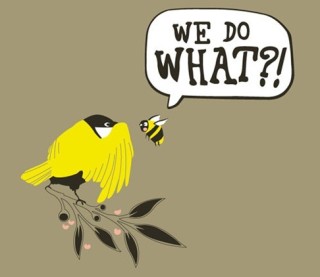 Little Daughter is not so little anymore. She’s ten years old and wanted to know, “When is puberty going to happen to me?…Why does it have to happen?…Do I have to use tampons cos they look nasty…” And other such curious questions.

I answered her the bestest way I could. Because I’m all about openness and honesty and good communication with my children.

And then she asked the million dollar question. The one that has most of us scrambling through the litany of crap fanciful stories/explanations we’ve ever heard. Like, storks that fly in your window with babies, cabbages that sprout chubby infants, fairies that sprinkle baby-making dust, and invisible baby delivery trucks that leave them on your doorstep or under a coconut tree. THAT question.

“So how do you make a baby anyway?”

This is not the first time that Little Daughter has asked me where babies come from. No. The first time she asked me how did a baby get into my big fat stomach – I told her “God put it there.” (And then when the baby came out and she wanted to know, ‘why is your stomach still fat?’ – I told her, the baby forgot to take all her luggage with her when she moved out.) And that answer was enough for her.

Not anymore. Now she wanted to know what did getting a monthly period have to do with babies? And the specifics of baby-making and baby-growing.

I was not fussed. Or bothered. I’ve done this twice already you know. Talked to Big Son and Big Daughter about sex and babies and condoms and everything in between. So yeah, I was cool with this conversation.  I told Little Daughter about sperm and eggs. And (very vaguely), I told her how they get together and start growing a baby. And how it was a beautiful and blessed thing.

She still looked puzzled. “But if a man has sperm and a woman has eggs – how does the sperm get to the egg then?”

Little Daughter wanted specifics. So I gave them to her. A bit more detailed and specific than simply, “Sex is a beautiful, sacred thing. A gift from God.” Just like the parenting textbooks tell me, I used correct terminology. Words like ‘penis’, ‘vagina’, ‘uterus’ blah blah blah.

I tried to fix it. Talked about joy and happiness and tenderness and closeness and love and all that blah blah blah – but she wasnt convinced. Sex is still disgusting. Horrifying. And it didnt seem to help when I told her, “Its not horrible. That’s how we helped to make you and you’re a wonderful child and we love you so much.”

Look of disgust. “Ewwwwwww, that’s even worse. You and Dad do that?” More tears.

I think my daughter has been traumatized for life. I really screwed up this sex-talk.

What have I learned from this?
1. Every child is different. What works for one won’t necessarily work for the other.
2. I should have just told Little Daughter that babies are made with sprinkles of fairy dust. Cabbages. And storks.

12 thoughts on “Let’s Talk About Sex”